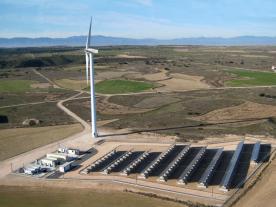 Gamesa’s new system can use wind energy, photovoltaics, diesel generators and a battery to supply power. It will be used primarily in areas where there are gaps in the power grid. Ignacio Martin, chairman of the board at Gamesa, stressed that more than 1.2 billion people lack electricity worldwide. “Rural areas in India, Southeast Asia, Africa, islands such as Haiti, Indonesia, the Philippines, and other remote areas such as jungles or deserts can all benefit from this off-grid solution that produces cheap, clean energy.”

According to Gamesa, the prototype is the first on the market that can provide a total capacity of two MW and combine four different sources of energy to adapt to the installation location, so that diesel fuel consumption is minimised.

The system includes a G52 850-kW wind turbine, a photovoltaic system with an output of 245 kW and three diesel generators with a total power of 666 kW. In addition, it is equipped with a battery that can store 500 kWh. According to Gamesa, the system can supply 400 families with electricity.

Gamesa plans to sell systems with a total capacity of 1,200 MW during the coming years. The company has gathered initial experience in the off-grid sector: in 2007, Gamesa installed a system on the Galapagos Islands (Ecuador), which consists of three diesel generators and three wind turbines.