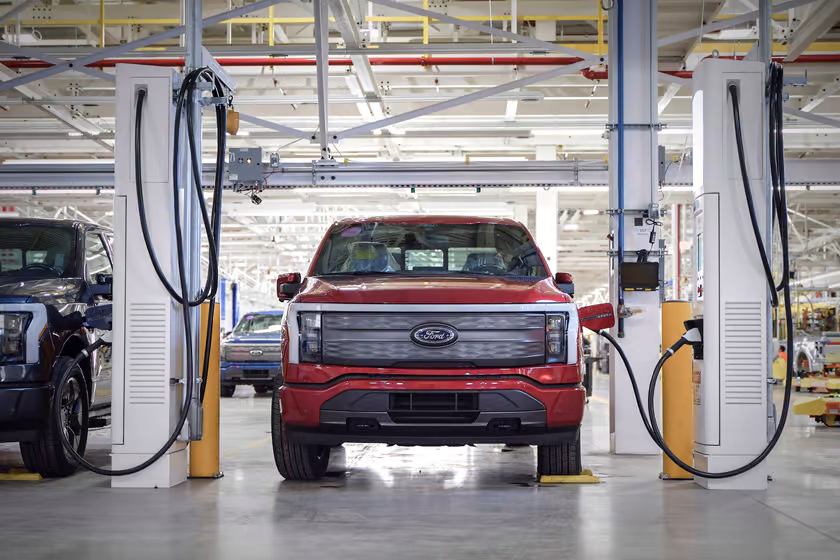 America’s best-selling vehicle series has officially gone electric. Ford kicked off production of the F-150 Lightning today, becoming the second manufacturer to get an all-electric pickup truck onto American roads, following Rivian. With a starting price just under US$40,000, up to 320 miles (515 km)of range and a best-ever 775 lb-ft (1,051 Nm) of torque, the Lightning promises big things for the hundreds of thousands of eager buyers lined up to place their order, as well as the auto market at large.

The Ford F-Series has been the bestselling truck in the United States for 45 years running, and according to Ford, lags behind only the iPhone as far as American consumer products with the highest revenues between 1977 and 2021. So naturally, the first-ever electric version is a big deal for both Ford and the EV market in general. Ford says it’s received 200,000 F-150 Lightning reservations since first revealing the truck in 2020.

Something of the anti-Cybertruck, the F-150 Lightning packs electric power and its accompanying advantages into the classic dimensions of a standard F-150 with SuperCrew Cab and 5.5-foot bed. It relies on a front/rear pair of fixed-magnet motors wired to buyer’s choice of 98-kWh standard or 131-kWh extended-range battery pack.

The Lightning also offers some intriguing benefits that ICE-driven F-150s do not, including the ability to serve as a silent backup residential power source for up to three days and a large “Mega Power Frunk” that doubles as a party cooler. On the downside, payload tops out at 2,000 lb (907 kg), well short of the ICE F-150 models that pack over 3,000 lb (1,360 kg). The question of how hard the truck’s range will be hit when fully loaded on payload or towing also remains a considerable concern for buyers looking to move serious weight.