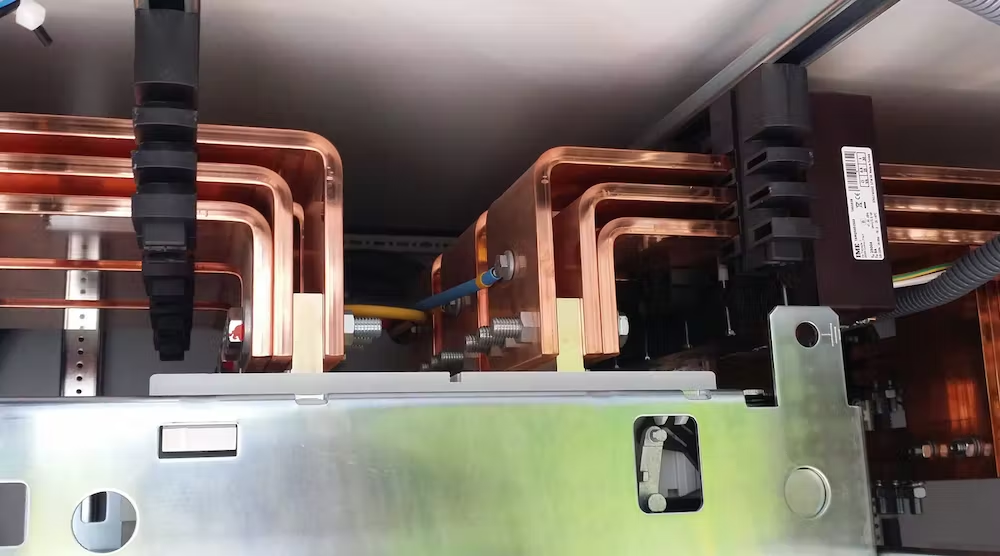 Do busbars need EMI filters?
Yes, they do. Just because they’re large imposing structures, they can cause interference in other systems if you don’t measure the EMI and take steps to get it under legal limits. In some cases, you might want to reduce EMI even further than the legal requirement to make a quiet electrical environment for your sensors or control system.

EMI noise is created by any fast-changing currents, often represented by the calculus term di/dt, that is, the change of current over time. Fast-changing currents have high di/dt. If those currents are in a loop, that makes a great antenna, and it will radiate noise into your system and beyond. That same loop antenna can receive noise as well, so your system might have less immunity to external radiation.

You can try to slow down switching transitions in your system to reduce EMI. However, some things, like diode reverse-recovery spikes, are hard to fix. You can look at silicon-carbide (SiC) devices and perhaps soft-switching techniques, but those all come at a cost. In general, it’s best to attack the sources of your EMI, but you also must come from the other direction and use EMI filters in your power-delivery system along with shielding around your system.

What types of EMI do busbars have?
There are two types of EMI: conducted and radiated. Conducted EMI is when switching devices in your system create noise in the power system. That noise gets conducted back up to the source (Fig. 1). The noise can appear as differential, i.e., across the power buses or common-mode, where the noise affects both buses at the same time.

Radiated EMI is when those same fast-switching nodes in your system radiate noise out into space. The noise might affect other circuits in your system, but a major concern is causing interference on other devices, such as radios, cell phones, and broadcast TV stations.

Governments regulate both types of EMI to protect consumers from loss of signal or degraded signals. There’s also a concern that severe EMI might so corrupt machinery it would become unsafe, perhaps re-homing a tool even though it wasn’t commanded by the controlling microprocessor.

What guidelines are there for busbar EMI?

The best advice is to reduce loop areas. This means running the busbars close together. However, that might cause proximity effects where the magnetic fields generated by the current in the busbars reduces the effective cross section of conducting metal. One method is to use interleaved or laminated busbars, which use insulation to get the bars closer than you would run them in air. Reducing the loop area will also reduce the inductance in the busbars, as well as cause a minor increase in capacitance. The capacitance isn’t a concern in dc systems and is rarely a problem in 50- or 60-Hz grids.

Are there any “quick fixes”?
Yes, you might try putting ferrite loops around your bus bars (Fig. 2). These are large versions of ferrite beads, sometimes called “prayer beads” by engineers, alluding to the fact that you put them around cables and wires and pray that your EMI falls to acceptable levels. Some ferrites for busbars come in two pieces, so you can assemble them around existing runs. Others come as a solid loop—you will have to install these as you build the system, or dismantle things in order to install them in an existing system.