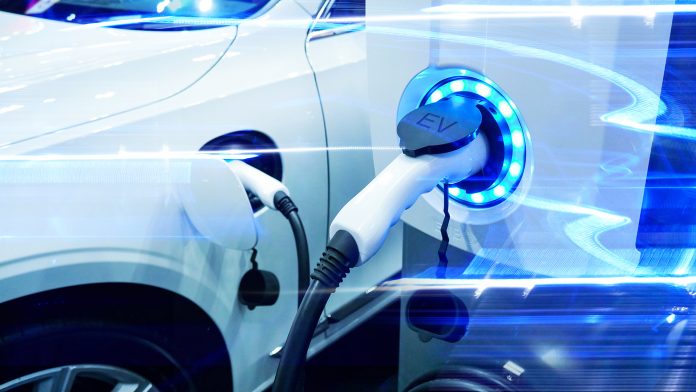 The team tracked the movement of lithium-ion in real-time inside a new battery material, identifying that the irregular movement of these lithium ions could be inhibiting the capacity and performance of the materials.

It was previously believed that the process in which lithium ions are stored was standardised across individual active particles; however, during the charge-discharge cycle, the researchers discovered this was not the case.

The study illuminated that when the battery is close to the end of its discharge cycle, the surfaces of the active particles become saturated by lithium. At the same time, their cores are lithium deficient, which leads to the loss of reusable lithium and a reduced capacity. The findings may help to optimise existing battery materials and develop next-generation batteries.

The study, which is published in Joule, was funded by the Faraday Institution.

Current limitations of electric vehicles
Electric vehicles (EVs) will be a crucial technology for achieving carbon-neutral goals, with the majority of current EVs being powered by lithium-ion batteries. For EV adoption to increase, longer ranges and shorter charging times will be essential, meaning traditional battery materials will need to be improved and new materials innovated.

An exciting candidate for battery materials is a state-of-the-art positive electrode called layered lithium nickel-rich oxides that are currently employed in premium EVs. However, the full performance of these materials has currently not been achieved.

This is because experts do not fully understand their working mechanisms, such as lithium-ion transport under practical operating conditions, and how this correlates to electrochemical performance.

Optimising battery materials
University of Cambridge researchers have now made a significant breakthrough toward understanding battery materials. The team tracked how light interacts with active particles during battery operation under a microscope, discovering distinct differences in lithium storage throughout the charge-discharge cycle in nickel-rich manganese cobalt oxide (NMC).

Alice Merryweather, the co-first author of the study from Cambridge’s Yusuf Hamied Department of Chemistry, said: “This is the first time that this non-uniformity in lithium storage has been directly observed in individual particles. Real-time techniques like ours are essential to capture this while the battery is cycling.”

Through amalgamating experimental observations with computer modelling, the team identified that the non-uniformity stems from significant changes to the rate of lithium-ion diffusion in NMC during the charge-discharge cycle. Most notably, lithium ions diffuse slowly in fully lithiated NMC particles, but the diffusion is increased when some of the lithium ions are extracted from these particles.

Dr Shrinidhi S Pandurangi from Cambridge’s Department of Engineering commented: “Our model provides insights into the range over which lithium-ion diffusion in NMC varies during the early stages of charging. Our model predicted lithium distributions accurately and captured the degree of heterogeneity observed in experiments. These predictions are key to understanding other battery degradation mechanisms such as particle fracture.”

The lithium heterogeneity at the end of the discharge explains why nickel-rich cathode materials usually lose about 10% of their capacity after the first charge-discharge cycle.

Dr Chao Xu, the co-first author of the study from ShanghaiTech University, explained: “This is significant, considering one industry standard that is used to determine whether a battery should be retired or not is when it has lost 20% of its capacity.”

The researchers are now working to improve the practical energy density and lifetime of these new battery materials.