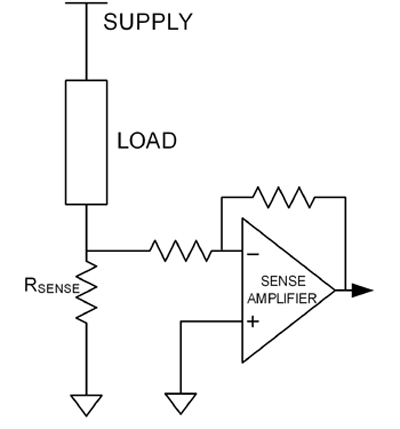 Although there are several ways to sense current flowing from a source such as a battery, or to a load such as a motor, the current-sense resistor is among the most widely used approaches. There are several reasons for this: reasonable cost, electrical compatibility with the rest of the circuit, and the ease of scaling and adjusting the sensing arrangement.

The basic principle is simple and based on Ohm’s Law: Insert a resistor of known value in series with the current flow, measure the voltage across that resistor, and do a simple I = V/R assessment, which can be accomplished with all-analog circuitry or via computation. This is often called a shunt resistor, but that’s somewhat of a misnomer, since the resistor doesn’t “shunt” anything.

The first question is: Should the sense resistor be inserted on the high side or the low side of the source or load? For various reasons, it’s almost always placed in the high side. In the low-side arrangement (Fig. 1), one terminal of the resistor is connected to the circuit common (generally called “ground” although this, too, is a misnomer in many cases).

1. Low-side sensing places the resistor between the load and common (ground). It simplifies the interface to the voltage-reading analog front-end, but brings problems with load integrity and loop stability.
While this makes it easier to sense the resistor voltage, it also means that the load is no longer connected to ground, which leads to system stability and performance issues. It also can’t be used with non-grounded loads such as motor in a H-bridge drive configuration.

The alternative is inserting the resistor on the high side, with neither end grounded (Fig. 2). As a result, the voltage-sensing circuit at the resistor can’t be a simple grounded amplifier. Instead, it must be a differential or instrumentation amplifier, and many ICs are available for this function.